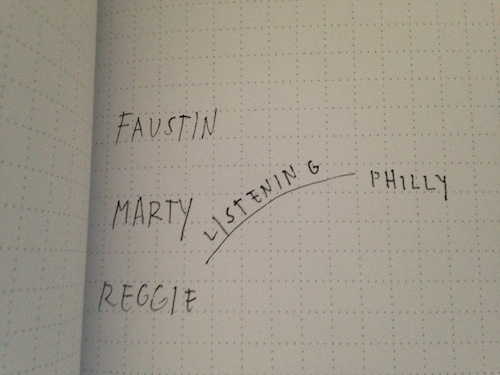 ​​Interlocutor Lauren Bakst reflects on her conversations with each of the Re-PLACE-ing Philadelphia Artists/Thinkers to find shared threads.

As the Re-PLACE-ing Philadelphia Artist Interlocutor, I had the opportunity to talk individually with each of the three Artists/Thinkers working on the project—Faustin Linyekula, Marty Pottenger, and Reggie Wilson—this past Spring. We discussed how each of them envisions their practice meeting the social and geographic Philadelphia landscape and the conceptual frames of the project. Over the past few months, it has been interesting to think about these three artists in relationship to each other and to consider what brings them together and the places where they diverge. (If this is your first introduction to the Re-PLACE-ing Philadelphia project, you can read a little more about the project and the roles of the Artists/Thinkers here.)

A meeting point that repeated across my conversations with the three artists was listening—listening as civic action; listening as creative process and practice. While none of the artists could foresee what final shape their work in Philadelphia might take (nor should they), they each were clear on their desire to be in conversation with people living, working, moving in Philly. Interestingly enough, listening has come up again and again, not only in conversations with the artists, but also with members of the Philadelphia community involved with the project. When Tsitsi Jaji facilitated the last steering committee meeting, she had us thinking about structures of speaking and listening in mono and stereo. Germaine Ingram and Denise Brown are currently developing a conversational text on the very subject of listening for the website. Donnell Jones, who is working with the Painted Bride to facilitate Communities in Residence is asking: What is the sound of your community? Free Radical King Britt is gathering together a Philly playlist to share on the site.

Listening, it seems, might be one way of getting at the questions this project is asking: How can “invisible archives of cultural memory” be made visible? Perhaps, following in Philly’s rich tradition of Black music and performance, the “how” of visibility has more to do with being heard than being seen. Or, can the two work in tandem with one another? How can we listen to Philly in order to see Philly?

In his collection of shaped prose, The Little Edges, Fred Moten writes:

“The listening is in watching how you move to touch in sounding, brushing up against your friend, to see how his position sounds to make the music we are making by moving the people moving around.”

Reading Moten’s writing, the way he reorders the senses, I’m reminded of listening to Faustin talk with Rizvana Bradley on his last visit to Philly—how Kristel Baldoz recalled him tapping his chest while speaking, and Najja Zimele-Keita’s recollection of him working it out on the dance floor later that night. Faustin’s current artistic inquiry revolves around the question: How can we make a circle? A deceptively simple prompt, in Faustin’s words, the circle is an ideal, but never a given. In our conversation, Faustin elaborated:

“How can everyone take responsibility towards making a circle, or at least creating the possibility of a circle, of a community? It can take many forms. It could be in the form of reading the constitution of the United States and saying Oh, Philadelphia, in the making of this constitution, in the shaping of the ideals of this country, played a major role. So, what is left of that?”

I hear Faustin’s impulse to reckon with the dominant narratives of history and structures of governance, a strategy not unfamiliar to him where he works and lives in Kisangani in the Congo. This impulse could also be felt in my conversation with Marty, who recounted the hyper-visibility of the history of the Revolutionary war in Philly, and asked, what other histories are not included in this memorialization? Marty is listening for stories in places that have yet to be fully historicized—researching alternative acts of rebellion in the city’s history, talking with the Lenape people whose ancestors lived and who still live in Philly, and looking to trees as sites of personal narratives.

Like Marty, Reggie also noticed how the city of Philadelphia presents itself to the public, not just through monuments but also through murals. Reggie mused:

“Whenever I’ve been to Philly, even before this project, I’ve always marveled at the murals. I like going around another corner and wondering what’s going to be there, whose painting is going to pop up. So there’s this aspect of public art in the city, and I’m wondering what kind of tradition there is for public art in performance.”

Reggie went on to describe a mural painted by two Dutch artists that covers several city blocks, wondering what “mechanisms of power” were at play in bringing those artists to Philly and endorsing their marks on public space. I am left considering the slippery exchanges between private and public, asking: Who determines the aesthetics of the public? When we say “public,” who are we referring to? Are there other aesthetics of the public that Re-PLACE-ing Philadelphia wants to make visible, heard, felt? As I reflect on my time talking with each of the Re-PLACE-ing Philadelphia Artists/Thinkers, I am inspired by their shared commitment to connecting with the personal voices and narratives within Philadelphia. I am excited to hear what cacophonies will emerge from their time together.