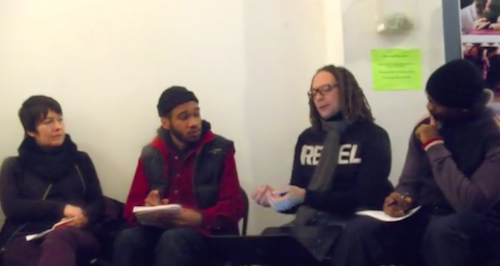 On February 5, 2015, the Painted Bride Art Center hosted its first steering committee meeting for the RePLACEing Philadelphia Project. After introducing the project, a conversation was facilitated by Thomas DeFrantz, who offers his reflections on the meeting and project here.

A dozen-and-a-half of us met at the Bride to discuss ways to enliven conversations and actions surrounding the multi-year project, Re-PLACE-ing Philadelphia. We included—surprisingly—at least six who are connected to academic institutions as arts faculty and administrators; this collection allowed us to think in terms of expansive ideologies for how to engage college-age audiences and participants for the project.

“Wow!” I thought—an opportunity to connect what happens in our classrooms in Philadelphia and beyond to a project underway at an important arts site in the city.

As Najja Zimele-Keita talked us through the ways he has already worked to begin organizing the project, I thought about building performance by including audiences as primary stakeholders in the event.

Too often, we think of the audience as the almost-passive recipients of a vague “gift” of artistry, offered up by a presenting organization. In this model, a critic might be a more “active” recipient, but still far outside the process that allows the performance to materialize. What if we worked to imagine Re-PLACE-ing Philadelphia by beginning with audience-stakeholders, active groups of audience participants who become involved in the run-up toward performance over a long process of a year or so?  What if we created audience groups who gathered and worked creatively together not just to see a show, but to imagine some of the themes of the project and their possibilities together, as active stakeholders in the creation of a performance process? These audience-stakeholders would not become actors or dancers in the creative piece to be shown by the visiting professional artists; rather, they could create their own network of interest and influence for thinking through the “re-placing” of Philadelphia with monthly events: poetry readings/creation sessions; urban planning/civic engagement lectures; music listening sessions; ‘get-to-know-the-invited-artist’ lecture/sessions. Building activities within the always-forming group throughout the year of the larger project could shift thinking about the roles of arts presenters from something like arbiters for art, toward cultivators of communities of arts-minded folks.

This model echoes something that Anna Deavere Smith attempted at her Institute on the Arts and Civic Dialogue at Harvard back in the 1990s. That project went away when the funding ran out and because it was at Harvard—which has only the tiniest sense of “civic presence” in Boston or Cambridge.  At the Bride, more is possible, and as these audience-agent-stakeholder groups mobilize, we can begin to model an important new day for arts presenting in the United States.

Thomas DeFrantz is Chair of African and African American Studies and Professor of Dance and Theater Studies at Duke University, and Director of the multi-disciplinary arts collective, SLIPPAGE: Performance|Culture|Technology.