Michael Bolton of the Philadelphia Opera shares his Philly playlist.

Opera is a seemingly elusive art form; those who love it tend to be moved in some visceral or unexpected way: opera’s passion, the music’s beauty; the glorious voices, etc. Then they get hooked for life.

I remember the first time I really “got” opera. I was sitting in what is now the Bryn Mawr Film Institute to see the movie Amadeus. I was about 16 or so and my life was about to change. Forever. I heard the Queen of the Night’s vengeance aria from Mozart’s The Magic Flute, the story of a young prince and princess who face a series of trials to find love (more or less). The sound coming from the movie theater speakers was so amazing and the music so magnificent that I literally couldn’t breathe. Opera suddenly rocked my world and I couldn’t get enough of a soprano’s highest notes and fastest vocal passages. Here’s that scene from the movie:

Soon I became the only person in my high school who knew anything about opera—and that was ok.

A few years later in 1987, I saw my very first opera at the Academy of Music in Center City. It was not for the faint of heart: Modest Mussorgsky’s monumental Russian masterpiece Boris Godunov, the story of the troubled Russian Tsar who ruled from 1598 until 1605. The Opera Company of Philadelphia production starred the Georgian bass Paata Burchuladze, a singer who recently won its Luciano Pavarotti International Voice Competition.  Boris’s coronation scene is one of the most majestic scenes in all of opera. A large chorus’s fortissimo cries of “Slava!” (Glory!) exult the arrival of the new tsar. The orchestra sounds almost otherworldly as the bells peal out underneath some of the most riveting orchestral rhythms.

It was also my first time in the Academy of Music, the Grand Old Lady of Broad Street. Modeled after the legendary La Scala opera house in Milan, Italy, it lived up to its reputation as one of the most beautiful opera houses in the world. It’s legacy as the oldest opera house in the United States that is still used for its original purpose is proudly worn as a badge of honor even today. The opera house opened on February 25, 1857 with a production of Verdi’s Il Trovatore (The Troubadour). It’s one of the more convoluted plots in opera—mistaken identities, babies thrown into the fire, rivals who don’t know they’re really brothers, and the ubiquitous love triangle—but the music can be, in turn, heart wrenchingly beautiful or dramatic. One of the most famous moments, familiar to many, is the Anvil Chorus, “Vedi le fosche notturne” (See the bleak night). The gypsies cavort and enjoy each other’s company, frolicking by the fire. For those who don’t know opera, you still know this one!

Enrico Caruso once said that all you needed for a great performance of Il Trovatore were the four greatest singers in the world. The famous Italian tenor was made more famous as he was one of the first superstars of the phonograph era. Not only did his voice record well, he was the greatest tenor of his age and considered by some to have the greatest tenor voice of the 20th century. He was so good that generations of tenors considered Caruso an inspiration. He spent quite a bit of time in the Philadelphia area, too. Not just performing at the Academy of Music, but also recording at RCA’s studios just across the Delaware River in Camden. The famed tower featuring the picture of Nipper, the RCA dog looking into the horn of a Victrola, was the location of RCA studios. Caruso made quite a few recordings at that location. There’s an iconic image of Caruso as Canio, the lead role in Leoncavallo’s opera Pagliacci (Clowns). 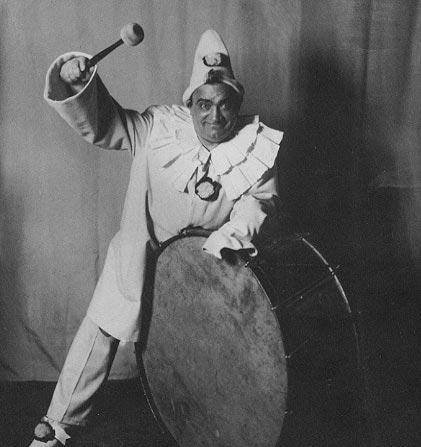 This picture would become synonymous with Caruso and become an iconic image of what many people thought opera was all about. Here’s Caruso’s recording of “Vesti la giubba” (Put on your costume), the famous aria from the opera. Canio, learning of his wife’s infidelity, struggles to put on his makeup and transform himself into a clown. He sings “Laugh, clown and everyone will applaud! ...Turn into jest your anguish and your sorrow, into a grimace your sobs and your grief.”

Since its opening the Academy of Music has seen its share of important American premieres—Richard Wagner’s Der fliegende Hollander (The Flying Dutchman), Richard Strauss’s Ariadne auf Naxos (Ariadne on Naxos), and Gounod’s Faust. For many a decade, Faust was one of the most popular operas in the world. The tale of a deal with the devil in order to regain one’s youth may seem a little old fashioned today, but the trio near the end of the opera is one of the genre's most dramatic and rousing. The demented heroine Marguerite realizes Mephistopheles is indeed the devil as her beloved Faust urges her to leave with him. Marguerite refuses. She dies and her soul ascends to heaven. Here’s a performance from Opera Company of Philadelphia, broadcast nationally on PBS in 1985 with French tenor Alain Vanzo in the title role, British soprano Valerie Masterson as Marguerite, and Baltimore’s own James Morris as Mephistopheles.

There are quite a number of famous opera singers to come from Philadelphia as well. Several attended South Philadelphia High School: contralto Marian Anderson, tenor Mario Lanza, and baritone Frank Guarrera.  Anderson was a pioneer with a voice described by conductor Arturo Toscanini as “a voice such as one hears once in a hundred years.” It was lush and dark and packaged in a humble vessel that chose to serve music but ended up serving a nation and mankind. Marian Anderson changed classical music forever. She famously was invited by Eleanor Roosevelt to sing a recital on the steps of the Lincoln Memorial after having been denied the opportunity to sing for the Daughters of the American Revolution. Anderson’s concert was held on Easter Sunday, April 9, 1939 and attracted 75,000. If you’re unfamiliar with Miss Anderson’s art or her story, I urge you to investigate all of it. Check out the Marian Anderson Historical Society or Union Baptist Church, both located near 19th and Fitzwater Streets in South Philadelphia.  I’ve chosen Marian Anderson’s famous recording of “Deep River.”  I can’t hear this spiritual without thinking of her. It’s not only her voice; it's how she communicates emotion through it. There’s the depth of the tone demonstrating faith, dignity and hope.

Many other singers have either come from Philadelphia (Florence Quivar) and the region (Anna Moffo), or studied at the famous Curtis Institute of Music (Juan Diego Flórez, Judith Blegen) or Academy of Vocal Arts (Joyce Di Donato, James Morris), to name just a few. Two recent opera stars are both from Philadelphia: bass-baritone Eric Owens from Mount Airy and tenor Stephen Costello from NE Philadelphia. Both trained exclusively in Philadelphia at such locations as Central High School, George Washington High School, Settlement Music School, Temple University, University of the Arts, Curtis Institute of Music and Academy of Vocal Arts. Both men are at the top of their game, singing all around the world, but always finding time to come back to Philadelphia.

Here’s a selection by Eric Owens performing with Opera Philadelphia in Verdi’s Don Carlo in April 2015. In this scene, he plays King Philip II of Spain.  Here, he confronts the Grand Inquisitor (bass, Morris Robinson) in a battle of church, state, and family. The scene is unique in opera as it’s one of the few duets for two bass voices.

Stephen Costello’s radiant tenor voice shines through as the charming Rinuccio in Puccini’s Gianni Schicchi from an Opera Philadelphia production in 2009. The comic opera tells the tale of a family scheming to rewrite the will of the recently deceased Gianni—in fact if you look hard enough you’ll see his body lying in bed still!

Finally, opera is absolutely for the masses. The unamplified voices touch people in a way that few other art forms can. In 2010, about thirty-five members of the Opera Philadelphia chorus did the company’s first flash mob at Reading Terminal Market, singing the "Brindisi" or drinking song. The smiles on the faces of those in attendance demonstrate that opera can be for everyone and in any location. I hope some of these clips have brought a smile to your face, too. Based on the number of hits on YouTube, at least 4M people have enjoyed it!