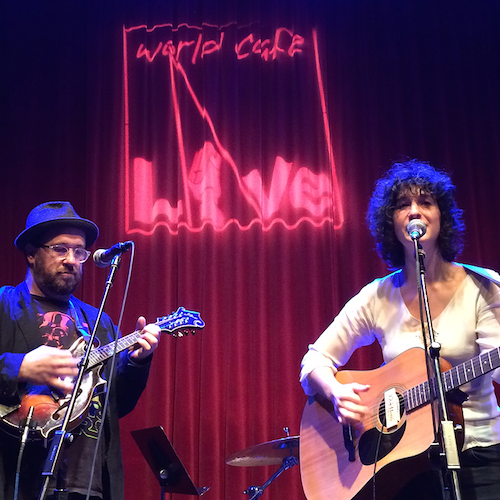 Emily Schuman of the acoustic duo Chickabiddy shares her playlist—songs that both reflect the history of the folk music community in Philadelphia and inspire her love for it.

Ed Reavy
An Irish-American Musician/Composer who emigrated to Philadelphia in 1912 and remained there for the rest of his life. He was a fiddler and is most well known for his composition of “The Hunter’s House” reel.

Beacoup Blue
A Philadelphia-based father-son duo. From blues to bluegrass they cover the range of the Americana music style. This is one of my favorite songs and their version is just lovely.

The Sun Flights
A local band that resides in West Philadelphia. I once attended a house concert they hosted in West Philly to bring together a community of music lovers in the Philadelphia area. I was inspired to be a part of amazing, local artists.

Chickabiddy
My band! I began playing music with theatre artist Aaron Cromie in 2015 and we eventually turned into a folk-acoustic duo. We are based in Philadelphia and are very much inspired by the folk music scene here.

Ryan Tennis
I met Ryan Tennis a few years ago when my sister brought me to The Clubhouse, a South Philly row home converted to a cozy music venue perfect for bringing lovers of music together. It was filled with people she had met at the Philly Folk Fest dancing and swaying to the cool tunes. I was so happy to discover the folk music community at The Clubhouse. Here is a music video of him playing with El Caribefunk, a Columbian funk band is a frequent visitor to The Clubhouse.

De Tierra Caliente
A quartet from Philadelphia and Puerto Rico that began playing in 2014. They are a latin party band that infuses latin, Caribbean, and Brazilian rhythms that create an amazing sound. I have also seen them play at The Clubhouse.