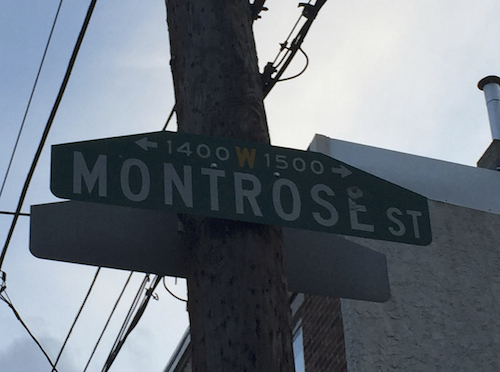 Poet Dine Watson shares a trio of poems inspired by her time growing up in Philadelphia.

I live in DC now, but was born in South Philadelphia and grew up on the 1400 block of Montrose Street. No matter where I go, I'll always be a Philly girl. I've been in DC for over a decade and when I meet people here, even before I open my mouth, they ask me where I'm from. They know I'm not from DC. I guess I just have that Philly "thing." I wrote this trio of poems to pay homage to the struggling yet striving community that made me. These poems reflect my memories of the apartment where I was born, behind the Crispus Attucks Hotel at 15th and Catherine Sts.; the block I lived on throughout my childhood; and the first time I left my neighborhood alone. Recently, I was back in the old neighborhood. It's changed a lot, but not in my heart.

I remember a flowered bed spread
tucked neatly around a fold out sofa
a polyester garden of wilted pansies
likely chosen to match the fading wall paper
a vain attempt, I’m sure, to bring the outside in
as they say in all the magazines.

I remember a console sitting over in the corner
as old and tired as the fading wall paper
but Sammy Davis Jr. would sing right to me
such high fidelity!
I’d twirl and twirl
going around with the record
catching glimpses of pansies
from the corner of my eye.

I could not have been more than three or four
too young to understand the meaning of anything
our two-room apartment down a long dark hallway
first floor back behind the colored hotel
my parents sleeping under a polyester garden
on a sofa that folded out
into a room meant for living.

I was much too young and didn’t understand
that the voice I heard
the man crooning in the console
was a one-eyed negro singing for his supper
and the colored hotel was named for Crispus Attucks
a runaway slave
and the first man to die
for the American dream.

How could I know?
As I twirled and twirled
around in that room
that my mother was dreaming on the fold out sofa
of a house with a yard full of real pansies blooming
and a bedroom fit for a proper lady.
What did I know?
I was just a little girl
who could feel the music
and it felt like freedom.

Where I’m Coming From: For Montrose Street

A little street full of little houses
12 in a row on either side
close enough for love and thunder
head heart hip toe.

Talking loud and saying nothing
cold beer in the barrel out back
huckster man calling wares from a wagon
number man pushing fifty cent dreams.

They wore the mask, the glove the apron
they wore the smiles and paid the price
they coaxed roses through the concrete
hand hope fist tears.

This is where I’m coming from
a people and place that time has taken
but I still day dream doubledutch
and hear the thunder
in my sleep.

Leaving On the No.2 Bus

Walked pass Miss Lee’s house
down to Tommy’s Barbershop
turned left onto Christian by the 7th Day Adventists’
walked up to 16th St.
standing up straight like I been told
and I’m waiting on the corner
for the No. 2 bus.

The men were gathered outside the barbershop
just like they gather every morning
they watched me as I passed them by.
I’ll be 13 by next summer
they called to me by my family name.

My father has given me a leather briefcase
like one he always meant to carry
he says I will grow into it
now I’m standing on the corner
at 16th and Christian.
wondering
how long it will take me
to grow into the briefcase.

My mother washed and pressed my hair last night
she curled it into a page boy style
with strips cut from a brown paper bag
black magic passed down from her mother’s mother
I am sparkly clean from head to toe
which mother says is all that matters
I think that this time she is wrong.