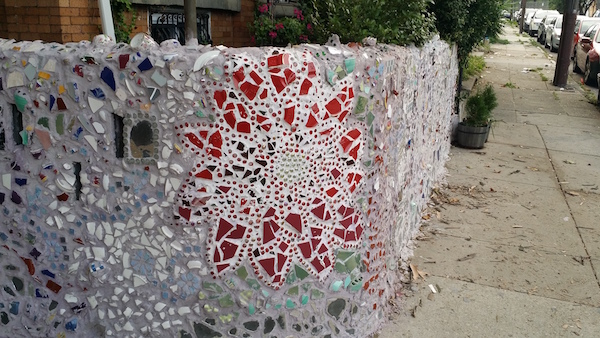 Valerie V. Gay shares the story behind ROW: HOM(e), Reclaim Our Wall: Helping Ourselves Modify, a project transforming the walls of Southwest Philly.

I remember growing up on a block of neighbors. Mrs. Petty was the last white woman left on the block. Mom and Dad said we were the second black family, and that it apparently took no time for our street to become all black, except for Mrs. Petty, our next door neighbor. She told me about the Holocaust before I read The Diary of Anne Frank in 6th grade. It was the summer I turned ten, after she told me to savor my single digit status because I can never recapture time. I asked her about her tattoo on her arm—why numbers? I think she asked my parents if she could share some of her story with me and my siblings.

Since we lived on the corner, our neighbors extended to two additional streets; the cross street, Warrington and the next block of Paxon, which meant more adults to be on the look out for what we kids were doing. Great. The old ladies especially loved to tell my parents what my three siblings and I were up to when we were outside playing. No—they only liked to tell the BAD stuff. Like the time my brother discovered the inner tube and its mystical power over a tire. “Hmmm…look how fast this bike tire goes down if I push on this part of the inner tube nozzle. I wonder what would happen if I did it to Daddy’s truck tires?...” Sadly, my brother never fully found out, since one of the old ladies who always sat on the porch called our Dad to let him know what my curious brother was doing…it didn’t end well for him. We left just as the neighborhood started to become overrun with drugs and crime. But my parents kept the house. It was the first property they purchased. They were 22 year-old homeowners.

We all laugh about that story, and many others, every time we all get together. And then the conversation turns to, “It’s too bad the block is a mess now…” Yes, it’s too bad. Most of the trees and flowers are gone. There are several abandoned homes now. Un- and underemployment and overall urban blight have overtaken the block. Some of the old families are still there. Grands and great-grands live in the homes now, many of which are in disrepair. Some of the residents have no memory of what it used to be like on our block. It was beautiful. I remember. I decided to sell my condo in Old City and move back to the house that I last lived in when I was 14 years old. I call my return, Operation Back to the ‘Hood.

I hired a moving company and jammed the rest into my Mom’s car and followed the truck to my old/new home. The nervous excitement I felt quickly turned to foreboding dread as we all pulled up in front of the house. There was a TON of trash and other debris in front and along the side and back of the house. I figured I could sweep and bag the trash, but there was also the WALL.

Prior to moving the family from the neighborhood, which started to see/feel the effects of drugs and increased crime, my father tore down the cyclone fence that surrounded our corner row home and erected a 4’ high cinderblock fence to deter the teens from sitting on it. My Dad painted the wall “Institutional Blue/Grey” and it was UGLY. I decided to tear down the wall and erect a 6’ wrought iron fence with spikes on top so that no one could sit on the fence, but see the gorgeous flowers I intended to grow. My daughter asked if instead, she could “have” the wall and install a mosaic mural made of broken household items like she saw in India (Anthropology degree from Temple U) and on South Street at Magic Gardens.

I agreed to “give” her the wall, with the stipulation that if it was ugly, the wall was coming down and my spikes were going up. She began the project, and like a pied piper, attracted up to 12 children from the neighborhood. Over the course of several months, my daughter taught the children how to install the mosaic, learned about their lives, introduced them to new children in the community—it was like a summer art camp! 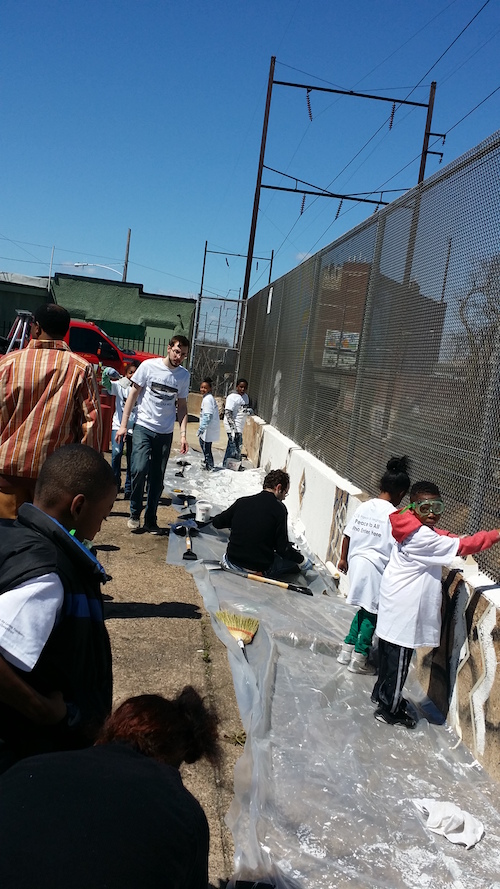 When she left to go to South Korea to teach English for a year, I inherited the project and the children. We had a great time, but as we neared completion, several of them asked, “When we finish this, then what?” What indeed...I had no answers until the block captain asked if we could transform the wall at the opposite end of the block in the same way. We learned about the Leeway Foundation’s Art and Change Grant. We applied, won, and began Reclaim Our Wall: Helping Ourselves Modify, aka ROW: HOM(e)– the “e” is silent. The goal was to use the grant funds to pay for materials like mortar and grout, as well as youth stipends, but every item that went on the wall was to come directly from members of the community.

Together, we would repurpose our household goods to bring new purpose to the wall dividing our community.

My yard became the collection site for donated items, and I was in charge of the “Artistic Vision.” The 29-year old block captain became the point person. A 14-year old appointed himself the “Youth Captain,” and together we became the leadership team. Over seven months, approximately 45 people worked to transform the 100’ long by 3’ high wall that once symbolized the blight in our community. 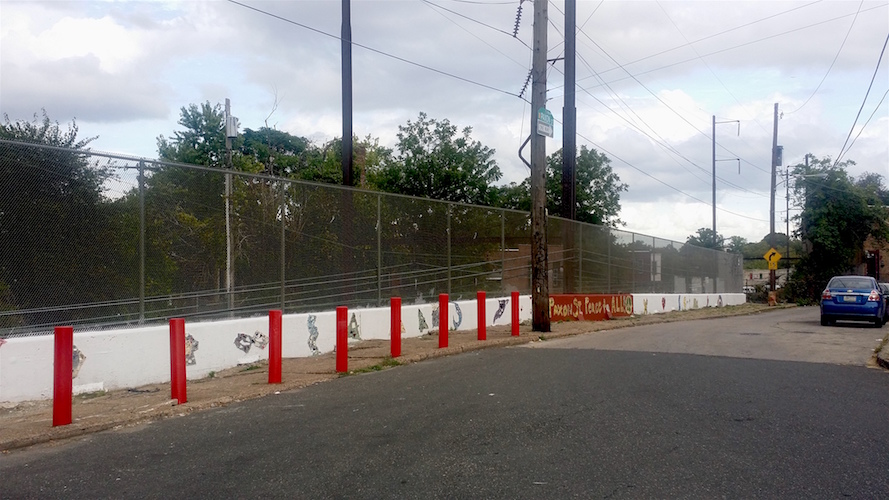 The wall now shows what is possible when people come together and give what they have to build up their community. Our final touch was to invite back all who had helped in any way to dip their hands in paint and put them on the wall. Together, we reclaimed the wall, with our own hands.

Upon completion, we celebrated and dedicated the Wall in October 2015 by holding a Press Conference and a block party. PEOPLE SHOWED UP! We even made two separate newscasts—the neighbors walked around in ROW: HOM(e) t shirts and smiled at their accomplishments. Everyone was PROUD to be a member of this community. It was a beautiful day.

We believe the two walls on opposite ends of the street are bringing beauty back to our block, and have sparked interest among others. Our block captain led the way with having a mosaic installed on her front stoop, and we now have a waiting list of neighbors who want us to install mosaics on their front stoops, which we will begin in Spring 2016, once the weather breaks.

Now, I have an answer when one of the youth asks, “What’s next?” 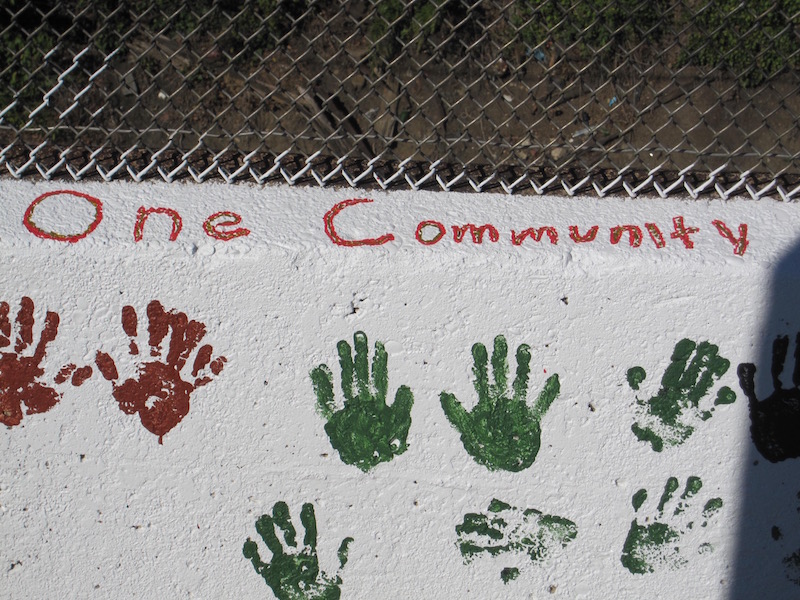 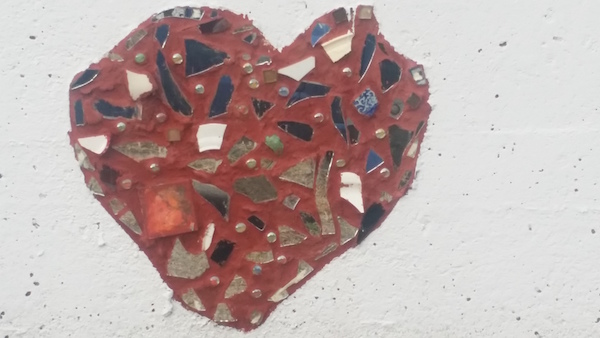