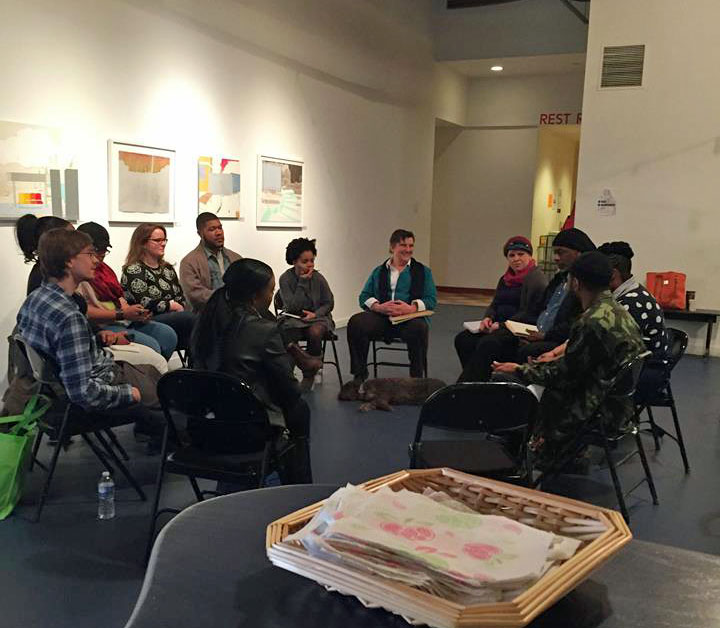 ​Marty Pottenger is a Re-PLACE-ing Philadelphia Artist/Thinker. Project Notes document and articulate Marty's process and engagement with Philadelphia as she develops new work that will be presented here in April 2016.

On March 19, 2015 RePLACEing Artist/Thinker Marty Pottenger sat down with Lauren Bakst at the Painted Bride Art Center to discuss her ideas for the RePLACEing Philadelphia project.

Lauren Bakst: I would love to hear about your work so far within the context of the RePLACEing Philadelphia project, maybe a little bit about the path you’re on and the different things that have peaked your interest.

Marty Pottenger: At this point, conceptually, there are three baskets that I’m interested in. The connections among them in my mind aren’t quite yet clear. The first basket is the history and heritage of the Lenape people in Philly and the larger region. With this project I’ve been asking:

What’s a lens that could offer insight and be able to serve as some sort of catalyst to people who live here?

The Lenape heritage seemed like a very useful lens both in terms of the stretch of time it encompasses, and in its implicit reference to genocide—the fact that we’re living, all of us, on land that we came by through a long and bloody history of genocide. And of course, the fact that the Lenape people are still living here and that they’re a part of the history of Philadelphia and who’s here. Their lineage and knowledge, and those connections to the land and to the water stretch back far. It’s a way that everyone in Philly has a uniting story, and I feel that we can more accurately address the present with the clarity of the past.

The second basket is trees. It’s important to me that there be an element of care for the environment in all the pieces I do going forward. I’m overwhelmed thinking about global warming and climate change. It’s so massive and sobering. I’ve told my nieces and nephews, the good news is that we have a true earth-sized, global-sized challenge, and for the first time, we have the means to address it effectively. It requires an earth-sized, global-sized response but the potential transformative changes and shifts that could happen as we collectively address it are phenomenal. Knowing that, I began thinking, what if people got to re-anchor, re-place, in their personal relationships and narratives with nature? Growing up, there were multiple trees that played very significant roles in my life—really, life or death impacts. Trees that allowed me to move to the next day; trees that helped me anchor my mind in something benign enough that I could negotiate my troubles. So I’ve been asking people, What’s a tree that has made a significant difference in your life? And where is it? What’s that story? Not everyone has one, but almost everyone—they think of it immediately. The stories are unbelievably compelling. The idea is to collect at least 1,000, if not more, tree stories from trees within Philadelphia. I’m still thinking about how the stories will manifest—perhaps people will come together to light their trees and we can use aerial photography to map them. The idea is that the stories would also live online where they could be listened to. I just thought “Philadelphia, City of Trees.” I don’t know if it’s a phrase “Philadelphia, City of History” or something—

MP: Right. (laughs) So, “City of Tree love.” It seems like that kind of anchoring in a real relationship with nature will make things go better, if that’s all that happens. If people get a chance to see: Woah, all these trees I’ve been passing by, that are here morning, noon, and night, are carrying these powerful narratives of so many individuals. I was here at The Bride for an event a few nights ago and asked a woman who was standing in front of me if she had a tree story. She responded immediately, explaining that she had been homeless for awhile. During that time, she said to God, “Just give me a tree so that I’ll know I’m home. I’ll know that I’m home when I see that tree.” After some period of time, she ended up staying in someone’s house, and when she went up to the room that she’d been given, she looked out the window, and saw the tree. She’s been there ever since. She said she knew in an instant that was the tree. So, this could go in so many different directions. The other layer is that when I make work, I’m always asking what are the key opportunities waiting to be seized here? I did a project in Portland, Maine called Meeting Place, which was aimed at increasing the likelihood that the neighborhood associations more accurately reflected the people who lived there. The neighborhood associations were very mono-cultural, in terms of class, race, education level, homeowners vs. renters. I haven’t gotten to do much research yet on Philadelphia’s neighborhood associations—and they’re often a very tough group to work with. The dynamics in those groups are very intense. I did find out that Philadelphia has these positions in different neighborhoods for someone who has been identified as a community leader. I’m going to meet with the person in the city who is responsible for organizing that, and see what that looks like. If each neighborhood takes responsibility for gathering their tree stories, then it’s re-invigorating and creating networks among neighbors who actually do live with each other and who actually will see each other. Whatever known and unknown anticipated challenges come in the future to Philadelphia, stronger neighbor relationships are just absolute gold.

The third basket is also for me equally exciting. Here’s this city where a real part of its identity and economic base revolves around history, but that history is pretty much limited to the American Revolutionary period. If you move to the late 60s and 70s, you’ve got this incredibly rich history of political activism, of liberation movement after liberation movement. You’ve got Black Panthers, Movement for a New Society, anti-nuclear and anti-war activists, women’s liberationists, lesbian & gay rights liberationists, Earth Day—Philadelphia held the first Earth Day and First Earth Week. Those people are now in there 60s, 70s and 80s, and it’s great that these movements are being archived in universities, but where’s the kind of livable relationship to these people and their work?

I’m interested in how we can capture these liberation movements and stories in living, more usable form, and in ways that can connect to movements like Occupy Wall Street that are in various forms of development today. I think that could be a real gift, to Philly, and to all of our future, to highlight and make more visible those connections and that body of information.

Somehow all these three things fit together, and I’m not worried about how they will yet. I’ve been an artist long enough to know that it does sort itself out. I don’t have to start pulling yarn from each basket or weaving anything together at this point. I’m just following these three different and very interesting threads.

LB: When you were speaking about the activist movements in the 60s and 70s and the relationship they might have to today, it brought to mind the Black Lives Matter movement. What connections can be made between not only Black Lives Matter and the Civil Rights Movement, but also for instance the Gay Rights movement? That feels very tangible in this moment. Especially when you’re just a visitor to the city, the memorialization and tourism and signage of the Revolutionary War is so prevalent, but there are also all these other histories.

MP: Right, and so in these interviews, I’ll be collecting where things took place, and seeing how they resonate geographically. I know for instance that Movement for a New Society had sixteen houses in West Philly. Speaking now as someone who is sixty-three, my heart is still broken about the assassinations of Malcolm X and Martin Luther King. We’re all carrying these collective traumas and have we really healed? How does that absence of healing affect our abilities to engage now? We really did think the world could change the way it was changing in our minds. I know I’m not alone in thinking we saw what was possible, and we were willing to risk everything. It made real dramatic differences, but at the same time, things emerged that are just the furthest from liberation. We have to reevaluate what we thought and what we now know. Have we gotten to process all we have now experienced as we are invited to reengage and engage in the next period?

LB: It sounds like civic dialogue is totally enmeshed in the work that you make, and that in some ways, it is the work. Since you just brought up healing, I wonder, does bringing artistic practice into civic dialogue have something to do with healing?

MP: I think so. I think there’s a transformative element. Recently, instead of saying civic dialogue, I’ve been thinking about civic listening. Because listening really is the transformative element in my work and it’s why I decided a couple of decades ago to really focus on theater, rather than a mix of traditional community organizing and activism which I had been doing up until that point. I think there’s something that happens in live performance that is singular, and exceptional. I figured it out kind of backwards—by being an audience member in a performance that wasn’t going well, and I kept looking for the off switch within my own consciousness. If I couldn’t be unconscious then I at least wanted to disengage from what was happening but I couldn’t find an off switch. I thought, damn, I can find an off switch in a movie, a conversation, a sermon, but in performance, there’s a part of me that engages that is without language and that is profound and painful. I do think that when you go see live performance you are taking your life in your hands in a very real way. You are in a place where the minor degrees of transformation can end up leading you in a very different direction over the long haul. That’s thrilling. In civic dialogues, I figure out how to structure them so that the people participating actually get to creatively engage and make some form of art using creativity. So it isn’t the talking to, it’s the being listened to that’s the transformative element.

Marty Pottenger is a writer, performer, director and activist. She is a Re-PLACE-ing Philadelphia Artist/Thinker. 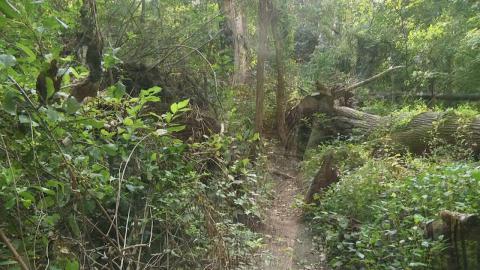